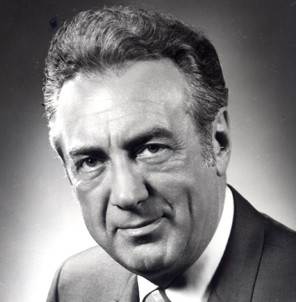 The City of Cleveland’s 52nd mayor, Ralph J. Perk, was well known for his human rights advocacy and his anti-communist, anti-totalitarian stance.

Before becoming Mayor, Perk served Ward 13 (Broadway/East 55th area) as its council member for five terms. In 1962, Perk, a Republican, won the first countywide election in Cuyahoga County in fifty years, and was elected as Auditor. He was re-elected to this position for two more terms. He had two unsuccessful attempts at a run for Mayor. In 1971 he won the Republican primary, beating out George Voinovich. He went on to win the general election succeeding Carl Stokes. He was re-elected again in 1973 and 1975. He lost in 1977 to Dennis Kucinich.

He was respected not only in Cleveland, but on a national level often being welcomed into the halls of Congress and the White House with close ties to Dwight Eisenhower, Ronald Reagan, Richard Nixon and Gerald Ford. He was able to turn those relationships into federal dollars for Cleveland, the city he loved so very much.

He was a strong proponent of regionalism of public services, and thus created the Northeast Ohio Regional Sewer District. It was under his tutelage that the Regional Transit Authority (RTA) was created. Chester Commons, Public Auditorium and Midszenty Plaza are all the results of his vision. He signed a 25 year lease agreement with Art Modell and the Cleveland Browns.

Mayor Perk never knew the boundaries of race, ethnicity or religion. Perk organized and ran the American Nationalities Movement, which is an agency which represents 35 nationality and ethnic groups. It was the result of his insistence that President Dwight Eisenhower signed into law Captive Nations Week, the third week in July. Every president, up to and including Barack Obama has continued the declaration of Captive Nations Week.

Perk is said to reflect the best of all things Cleveland. He lived in his Broadway-Fleet home with his wife, Lucille, their six sons and their daughter. He was a devout Roman Catholic and a faithful family man. He was respected in political circles as well as social and private circles. He spent countless hours calling attention to Cleveland’s ethnic and cultural diversity, understanding the value this brought to potential investors in the city.

A man with deep insight into Cleveland’s future he established the Office of International Trade at City Hall. He was pro-business which insured new development for this city for years beyond his term. Ralph Perk understood what it meant to be one of the people. He never forgot his ethnic background or his roots. He worked hard to maintain and celebrate cultural diversity in the City of Cleveland.

Perk died in 1999 leaving the people who knew him and the city who loved him better off for his efforts.