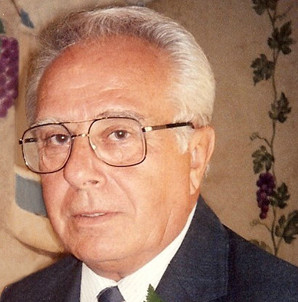 Josef Holzer was born in September of 1926 in Apatin, Batschka, in the former Yugoslavia, where he attended elementary school, high school, and then studied to become an electrician. He eventually met and married Franziska Kufner, a union that would last 62 years until Franziska’s passing in November of 2011.
In 1952, with his wife, young daughter Ilse, and parents, he immigrated to Cleveland, Ohio, where he found a job as an electrician with the Ford Motor Company. Today, he is a grandfather of three and a great grandfather of two.

During that time span, he also served the national organization, The Society of the Donauschwaben U.S.A., as a Regional President. In these roles, he demonstrated his leadership ability and served as a mentor to many. Joe’s legacy as a leader of the Donauschwaben includes, without a doubt, his ability to get young people interested and involved in various leadership roles at both the local and national level to ensure the organization’s future.

During his 30 year tenure as President, Joe received many accolades for his accomplishments to foster the growth of the Donauschwaben organization and to secure its future. These accomplishments can be attributed to his many talents and abilities, the greatest of which are his natural warmth, good nature and ability to make everyone feel comfortable and welcome.

Joe possesses a willingness to stand up for others; he is a man of his word; and, he has earned the friendship, respect and admiration of members, friends, colleagues and community leaders throughout the decades that he has served the Donauschwaben organization. The friendships Joe has fostered over time encompass Donauschwaben from around the world, bishops and priests, mayors and governors, police and firemen, as well as neighbors from within the community that include the retirees who fish at Lenau Park during the week. As many of the founding members of the Donauschwaben organization had children, Joe was quick to embrace each one of those children as “his kids” and referred to them as “our future”; in return, the Donauschwaben youth called him Uncle Sepp, monikers that have stood the test of time.

Joe is also a natural leader with the ability to motivate others to his cause and encourage them to work together. His love and respect for his heritage, and the traditions of the Donauschwaben culture are well known, and endear him even more to those who call him friend. His “lead by example” approach inspired all to contribute where they could. These qualities made him the perfect individual to lead the Donauschwaben organization into the future.

Nothing exemplifies this more than the building of our facility in Olmsted Township, an undertaking that would take every bit of 15 years to complete. Joe’s vision for the future of the organization, his willingness to dedicate himself to the project, and his ability to lead others in accomplishing the goal made the impossible become reality. Overseeing the design, construction and fundraising aspects of the project, Joe brought the Donauschwaben community together to see this plan to fruition.

Along with all his other qualities, one more needs mentioning. Joe has always had a great love of children, and wishes to ensure that the organization remain strong for generations to come. Today, the facility in Olmsted Township, also known as Lenau Park, is home to many programs for children which instill in them an appreciation of their Donauschwaben ancestry. These include a German Language School, Youth Folk Dancing Groups, and a growing Youth Soccer Program. Other programs enjoyed by both the young and old include a ski club, tennis club, and a brass band.

The organization rounds out the group offerings with a European-style bowling group, a ladies auxiliary, and a senior group. Joe always knew that in order for the organization to be successful, there had to be a place that members could call home; a place where they could participate in cultural activities; and, a place for “our youth” to learn about their ancestors and their traditions.

One would think that after completing the building project, Joe’s work would be finished. However, after the building opened in 1986, he continued on as the organization’s President for another ten years. During the last decade, he worked tirelessly to support various groups and programs, to complete additional projects at the facility, and to secure funding into the future.

After stepping down as President, Joe was named an Honorary President of the organization and took on the role of Director of Operations, titles he still holds today. Even at the age of 86, there is rarely a day that he is not at Lenau Park overseeing an operations concern, acting as “Mr. Hospitality” in the restaurant, feeding the fish, or meeting friends and acquaintances, both young and old.

Josef Holzer’s legacy includes a great many accomplishments, spanning a lifetime of labor for a cause he holds dear. For the generations of members that follow him, he has instilled an appreciation for the customs and traditions of the Donauschwaben culture, a commitment to perpetuating that culture through youth programs and education, and an understanding that all such ventures require time, energy, and a great deal of commitment. As an organization, we owe Joe a debt of gratitude that can only be repaid with an ongoing commitment to the future of the Donauschwaben in Cleveland.