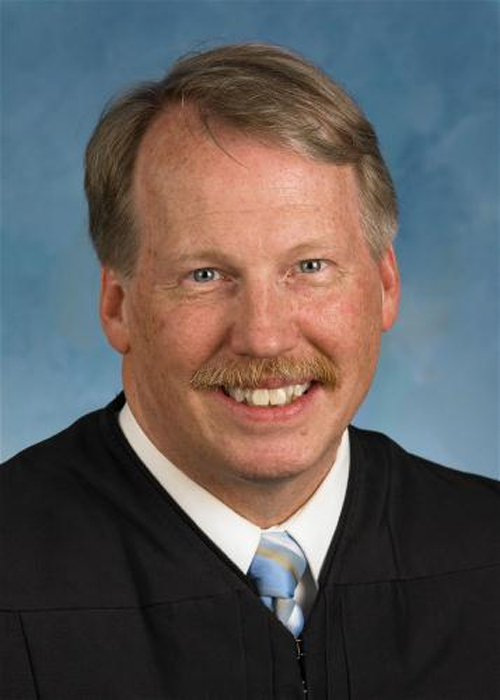 The induction speech for Judge Ray Pianka was given
by Cleveland Councilman Anthony Brancatelli.
Karen Pianka accepted the honor for her late husband
and daughter Kirsten Pianka spoke on his behalf.

Click on the white arrow in the image below to watch the videos of the speeches.
Then, click the icon in the lower right to make it full screen.

Enjoy these other images from Judge Ray Pianka’s induction
into the Cleveland International Hall of Fame.
Scroll down to read his bio. 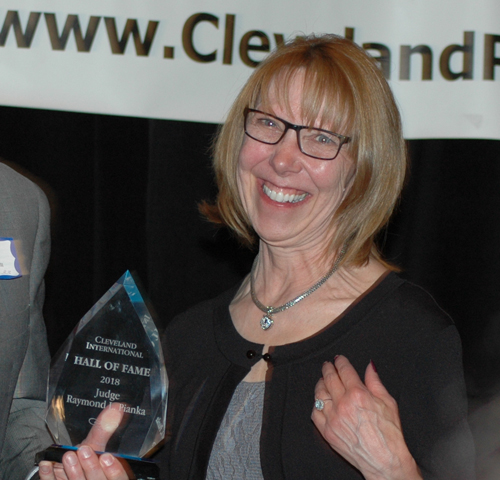 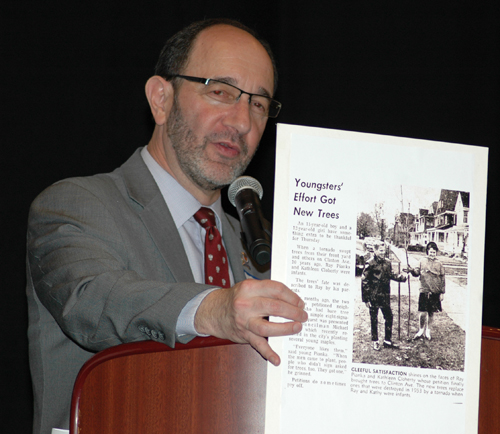 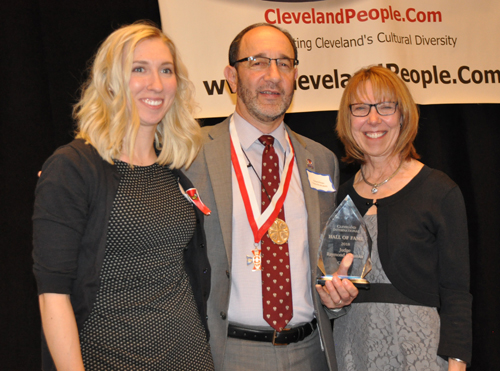 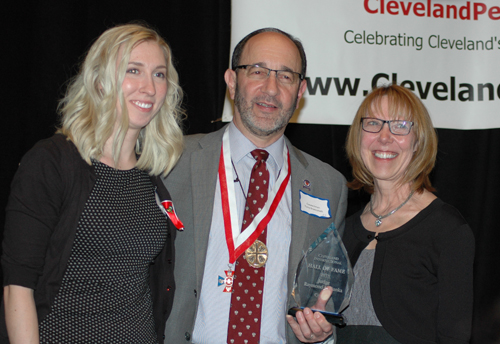 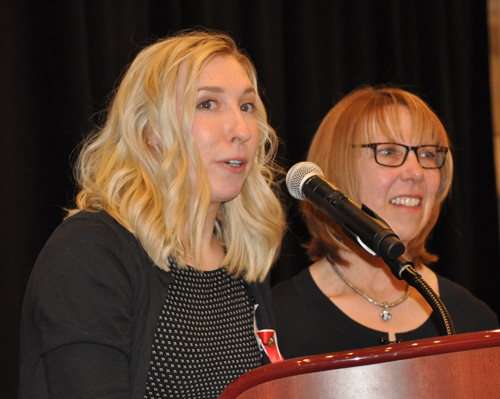 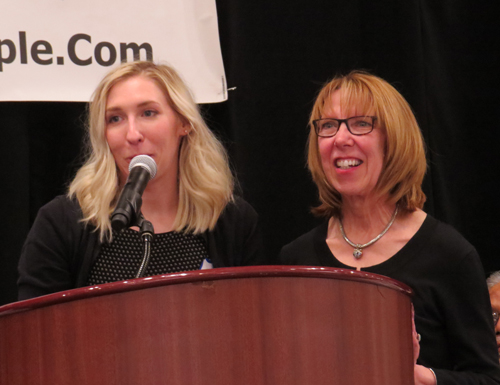 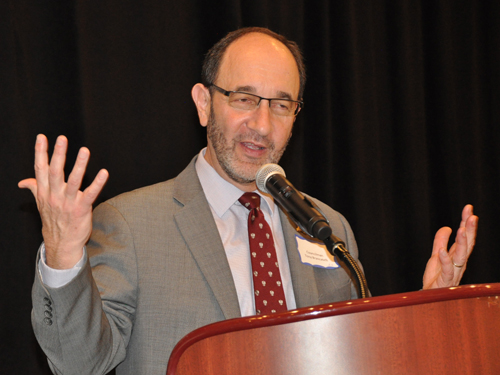 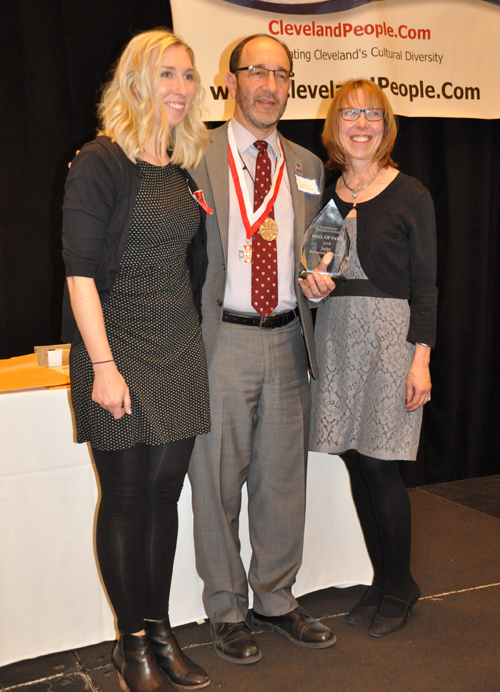 Congratulation Judge Pianka. You were well represented by your family and friends. Kirsten Pianka, Councilman Tony Brancatelli and Karen Pianka

“Dla chcącego nic trudnego” is Polish for “Where there’s a will, there’s a way”. Judge Raymond L. Pianka often quoted this Polish phrase when explaining how he was able to accomplish so much for the people of his Cleveland neighborhood, other city neighborhoods, as well as his city.

Ray Pianka was always about public service. The author Alex Kotlowitz described him as “humble, a student of history, courageous, empathetic, filled with a (sometimes corny) sense of humor and directed by the belief that life ought to be fair.”

As a young man, Ray Pianka organized residents on West Clinton Avenue, his street on the west side of Cleveland, to get trees planted, some of which still shade the street. He also tried to save a historic home where Theodore Roosevelt had once stayed; although he lost that battle, his commitment to his Detroit-Shoreway neighborhood led to his dedication to the City of Cleveland, and the belief, in a time when others were abandoning all hope for the nation’s urban areas, that cities were unique places that could provide the sense of community so necessary for a healthy society.

Educated in Cleveland public schools, Ray Pianka graduated from the old West High, where he met Karen Olson, who later became his wife. He graduated from Cleveland State University, and then attended the Cleveland-Marshall College of Law while helping start the Detroit Shoreway Community Development Organization in 1973; he became the organization’s first executive director.

Pianka was a key player in many economic development and community projects, and was instrumental in saving the Gordon Square Arcade building from demolition, which is today the centerpiece of the thriving Gordon Square Arts District.

Ray Pianka first ran for Cleveland City Council in 1985 because he felt that his neighborhood wasn’t getting the service it needed; he knew he could do more for his neighborhood than he had already done running the community organization. Ray was a long-shot candidate running against a well-known incumbent, but he ended up winning the race (Dla chcącego nic trudnego).

He championed neighborhood development and sought innovative ways to help the community. For example, he used block grant funds to hire neighborhood residents to plant trees and beautify the I-90 corridor in his ward. Pianka became chair of Council’s Community and Economic Development Committee, where he led the effort to equalize spending federal community development funds in all city neighborhoods. He also worked to strengthen the city’s building and housing codes and increased funding for building inspections.

Ray Pianka was first elected to the Cleveland Housing Court in 1995. As judge, Pianka implemented numerous innovative programs to help people comply with the City of Cleveland’s building, housing, and health codes. These programs included requiring negligent landowners to pay neighbors for the blight their properties cause and imposing daily fines on landowners who didn’t show up in his courtroom for housing code violations.

Often when individual homeowners, residents who might be on the cusp of foreclosure or struggling to pay health care bills or needing a job, ended up in front of him, Judge Pianka just wanted to know what got them there — and what he and the city could do to help get them back on their feet. He and his court staff worked with the homeowner to get the violations corrected as well as get stabilized in other areas. But when people came into Cleveland to make money off the misfortune of others by flipping homes, Judge Pianka fined and even jailed them when they refused to maintain their properties. Steve Lorenz, of Cleveland’s Kamm’s Corners neighborhood, wrote, “He (Ray) was keen at discerning the story tellers from those who really needed help.”

There may be no one else in the city who has the same depth of knowledge and the compassion toward Cleveland’s neighborhoods that Ray Pianka had. Frequently, he would surprise defendants in the court by knowing details about their own street.
Ray Pianka was involved in Cleveland’s Slavic Village neighborhood, supporting efforts by the Polish Catholic churches to teach Polish language and culture.

In 2017, the Shrine Church of St. Stanislaus posthumously awarded Ray its annual “Four Eagle Award”, which honors an individual who has been especially noteworthy in building up the greater community.

Ray knew that a street in his Detroit-Shoreway neighborhood was where the famed boxer Johnny Kilbane had lived, and worked with the Irish American Archives Society on the Johnny Kilbane Sculpture Project. The Society honored him with its’ Thomas J. Campbell Award in 2015.

Judge Ray Pianka once wrote, “Nothing I have done or could do to serve my community is more important, or more fulfilling, than being the Housing Court Judge.”

Author Alex Kotlowitz wrote this about Ray Pianka: “He’s our north star. He’s what we all should aspire to. He’s the best of America. He was a good friend. And a good man. He’s shown us the way.” Dla chcącego nic trudnego.

Rest in Peace Judge Pianka.  You are greatly missed.