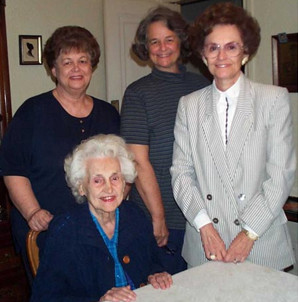 Born in Cleveland in 1899, Helen Karpinski was raised in Reynoldsville, Pa. in a family of originally 13 children. Her father was a coal miner; her mother, Anna Olszewski, was the daughter of an inn keeper. After the eighth grade, Helen had to leave school to work in the silk mills. When the mills closed, she and her sister, both in their early teens, returned to Cleveland for work. The family followed.
She married Johnny Karpinski, who was the first Ohioan to win an international boxing match: he was the amateur welter-weight champion of the world–a title he won in Denmark in 1916. He was also the son of a Democrat, who helped mayors win votes in the Polish community. Learning from her husband, whom she succeeded as precinct committee-person, Helen was elected ward leader for 15 years. She served on both the County and State Democratic Executive Committees. Starting in 1932, she was a delegate or alternate to many national Democratic Conventions and served on the prestigious Credentials Committee. From 1980 to 1984 she was a member of the Democratic National Committee, where she served on its Ethnic Committee.

In 1939, she was the first woman to survive a primary for Cleveland City Council under the current charter. She lost in the general election to an opponent who concentrated his campaign on the question: What does one woman want to do there with all those men? Subsequent women candidates focused more on her success in the primary election, in which she prevailed over a third candidate–the incumbent and the former sheriff. Helen spent the rest of her life showing the way to other women candidates.

Under her leadership as president, the Federated Democratic Women of Ohio drafted a woman for Treasurer of the State of Ohio: Gertrude Donahey. Helen was state chair of her successful 1970 campaign, which resulted in the election of the first woman to be elected to Ohio administrative office. In 1974 the Federation recognized Helen as the Ohio Democratic Woman of the Year. For her pioneering efforts in the changing role of women and their emergence, especially in politics and government, the Ohio Hall of Fame gave her an award as a special honoree in 1983.

Proud of her Polish heritage, Helen actively participated in the American Polish Women’s Club and served as its sixth President. For over 20 years she was a chapter officer in the Polish Women’s Alliance of America, and also a member of the Alliance of Poles, and the Polish Congress–Ohio Division. She helped organize, and later served as an officer in, the Ladies Auxiliary of the Polish Legion of American Veterans, George Washington Post # 31. She was a founder of the Ave Maria Senior Citizens Club at St. Casimir Church, where she was married. For her services to the Polish community, she received the 1984 Annual Recognition Award from the Polonia Foundation of Ohio

For 43 years she was a member of the Cleveland Cultural Garden Federation, in which she helped establish and then represented the Polish Garden. She led the drive to install a sculptured bust of Madame Marie Curie in the Polish Garden.

She served as the Federation Treasurer for many years and also as Vice-President. One of her major goals, which evolved from this experience, was to develop mutual understanding among ethnics. In furtherance of this goal of ethnic co-operation, she helped found the Women’s Cosmopolitan Democratic League and served as its President in 1952. In 1965 she received the Community Service Award from the Baptist Ministers Association. WomenSpace also awarded her the Josephine Irwin Award.

Reporting her 100th birthday, The Plain Dealer observed that Helen’s influence not only crossed generations, but gender and ethnicity as well, as was evidenced by the variety of awards she received.