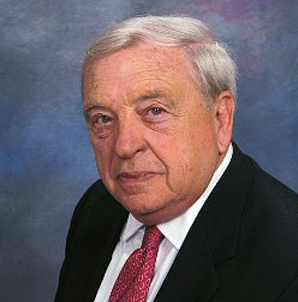 Robert (Bob) Haas was born and raised on Cleveland’s west side. Married for 17 years to his wife Barbara, Bob has two sons and three grand children. He graduated from St. Edward High School, attended John Carroll University, and graduated from the Ohio Highway Patrol Police Academy.
Hired by the City of Berea Police Department, he served 15 years as a patrol officer. He was then promoted and served 10 years as a detective before being named the department’s Community Relations Officer, a post he held for 10 years prior to his retirement in 2010. During his 35 years in public service, Bob founded Berea’s Block Watch program and was also instrumental in forming the city’s Safety Town.

To say that Bob is retired, however, is a bit of a misnomer. Currently he is the Executive Director and founder of the Cleveland Oktoberfest, while also serving on the board of the Cuyahoga County Fairgrounds. His grandparents having both migrated from Germany, as a youth, Bob’s parents played a pivotal role in teaching him about his German heritage, culture and traditions.

Some of his fondest memories are of times spent enjoying German food and music with his family at Kiefer’s Restaurant on Detroit and W. 25th. “Every holiday was filled with German traditions and food which made the holidays something very special.”

As a Police officer, he worked at the Oktoberfests held by Steve Bencic at the Cuyahoga County Fairgrounds, and was saddened when the festival left Berea, only to die a slow death in Lake County. Whether he knew it or not at the time, a seed had been planted, and in 2005, with the help of volunteers from the Berea Kiwanis, Berea Rotary, and the Donauschwaben, Bob undertook the yeoman’s task of bringing the Oktoberfest back to the fairgrounds.

Despite financial difficulty, a tough economy and population drain, the Cleveland Oktoberfest has over the past five years beaten the odds and grown into a world class event, where all Clevelanders can celebrate German culture and traditions.

While organizing the Oktoberfest, Bob noticed that several other long-held cultural festivals in the Cleveland area were experiencing hardship due to the economy and a deteriorating urban environment-some disappearing entirely. Desiring to provide a venue where all cultures might showcase their heritage in music and dance, Bob founded the William F. Miller International Pavilion at the Oktoberfest.

“It is one of the features of the Oktoberfest that I am most proud of,” said Mr. Haas. “The great city of Cleveland is comprised of so many different nationalities and cultures…. I wanted to give all of them a chance to share their customs and traditions.” And this he has done, as the Oktoberfest currently features acts representative of over 20 different ethnicities.

What most impresses Mr. Haas isn’t the dramatic intra-cultural dissimilarities in geographic origin, music, cuisine, language, or traditional dress, but rather the commonalities… the thread of humanity that is woven through all cultures–the similarities of courtship and harvest dances, regardless of nationality–and the realization that despite our differences, we are all bound together by a universal need to celebrate life through music, dance, and friendship.

Bob noted, “I consider it a great honor to be inducted into the International Hall of Fame and will continue to work at bringing all of Cleveland’s ethnic communities together.”