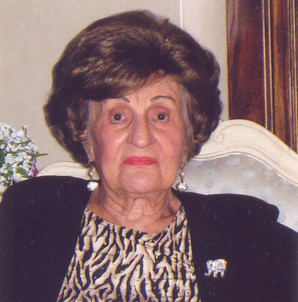 Lucretia Stoica was born in Youngstown, Ohio. As a young child she travelled to Romania where she grew up and completed her University studies obtaining a Master Degree in Law, Literature and Philosophy.

As an American abroad, she was among the first to be repatriated by the American government after World War II.

Upon return to Cleveland Lucretia joined the staff of the International Institute of the YWCA, a non-profit agency now known as the International Services Center. She served the agency first as a case worker, then as a Deputy Director, and finally as its Executive Director for 26 years. On June 1, 1988 she retired after 41 years of service.

Included in her professional activities were free lance writing for the Voice of America and defending aliens in immigration and deportation proceedings at Ellis Island. For a few years she was a volunteer instructor for the Outreach Program of the Immigration and Naturalization Service.

During the early 1950s she organized a series of conferences and festivals promoting the cultural background of the nationality groups in the Cleveland area and emphasizing the outstanding contribution made to the city and state of Ohio by the immigrants. These programs were later used as a model by other community groups and organization.

In the late 1960s, under a considerable grant from the Ford Foundation, she founded, organized and administered a new organization “PROJECT BRIDGE”, with the specific mission of bridging the gap between the nationality and other ethnic groups bringing about better understanding, appreciation and cooperation among them. For six years she headed two agencies: Nationalities Services Center and Project Bridge.

In the early 1970s, with three other ladies she, co-founded the LANGUAGE BANK OF CLEVELAND, providing free Translation and interpreting services to hospitals, educational institutions, courts, visitor’s bureau, and many other public and private organizations.

For four decades she re-edited and published the Nationality Directory, founded by journalist Theodor Andrica. The directory contained the names, addresses, leadership and a short history of over 2000 different ethnic organizations in the State of Ohio.

For several years she chaired the Ohio Refugee Advisory Council and was a founder of the Cleveland Refugee Resettlement Committee dealing with legislation benefiting refugees. For thirty years she edited and published a News Bulletin providing information on the latest legislation and regulation concerning immigrants and refugees. She testified on many occasions before congress and local public hearings about proposed legislation.

She served on many boards and committees. Among them are the following: