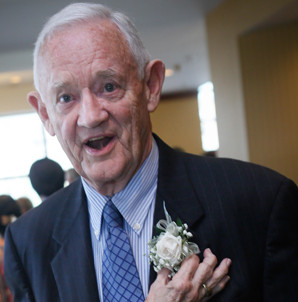 John (“Jack”) P. Coyne was born in Cleveland, Ohio. John is a graduate of Benedictine High School, and he received his accounting degree and law degree from the University of Notre Dame. John has practiced law in Cleveland for fifty six years. After law school he became a Captain in the United States army and the Ohio National Guard, serving eight years.

As Founder of Park-Here, Inc., later known as Coyne-Kangesser Parking and now a Division of ABM, John is Vice President of Development and is widely known throughout the parking industry. He was Director of the National Parking Association and serves as Trustee to the Cleveland Parking Association. He presently serves on the Boards of the Historic Warehouse District and the Downtown Cleveland Alliance and is President of the Irish-American Charitable Foundation.

He is past president of the St. Ignatius Father’s Club, the Catholic Counseling Center, and the University of Notre Dame – Cleveland Club.

John has served as legal counsel and Director of the State Saving and Loan Company of South Euclid, Citizen Home Savings and Loan of Lorain, and Pioneer Savings of Cleveland.

John became active in the Irish Community when he was seventeen years old and was Drum Major for the East Side I.A. Club in the early 1950’s. After Law School he became involved with the West Side I.A. Club. At the Club he worked with Terry Joyce, a well-known labor leader and activist for the Irish. This led to his involvement in The Irish National Caucus, which was and still is an Irish-American Lobby Group founded by Father Sean McManus of Washington, D.C. The Lobby Group was formed to counterbalance British influences in the United States Congress and government at a time when Northern Ireland was engulfed in violence. John became President of the Cleveland Chapter.

In 1981 Project Children evolved from the Irish National Caucus. Project Children is an American-Northern Ireland partnership dedicated to showing Catholic and Protestant children that they have nothing to fear from each other and much to gain. The Program originated in New York in 1975. The purpose was to give all the children a much needed break from the grim politics of their country and an extraordinary opportunity to interact together. Most important, it kept the children away from the violence and the paramilitaries who worked double time recruiting the children during school breaks.

The first Group arrived in Cleveland in 1983 under the umbrella of the Irish National Caucus. In 1984 John took charge of the Program. He and his wife Mary personally took over the interviewing, placement of children, summer activities, and fund raising. The Cleveland Chapter closed in 1996 when John and Mary’s daughter, Cathleen, became ill.

The mission of the ICAF is to support and provide start-up funds to promote and develop the sustained growth of cultural and educational activities of Irish American organizations in the Northeast Ohio area. In the past several years the ICAF has hosted the Irish Sopranos at Severance Hall, worked with the Irish Garden Club to support its renovation and expansion of the Garden. ICAF supported the Cleveland Public Theatre in its tribute to W. B Yeats, and most recently underwrote the re-publication of the Greater Cleveland Irish Directory.

John has been the recipient of numerous awards throughout the years.

John is married to Mary O’Rourke for the past fifty-nine years and is the proud father of six children and twelve grandchildren. He resides in Shaker Heights.