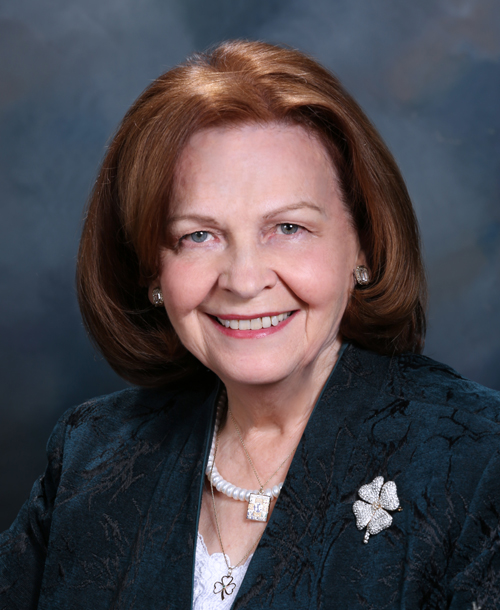 The induction speech for Sheila Murphy Crawford was given by 2011 Cleveland International Hall of Fame inductee Gerry Quinn.

Enjoy these other images from Sheila Murphy Crawford’s induction into the Cleveland International Hall of Fame.  Scroll down to read her bio. 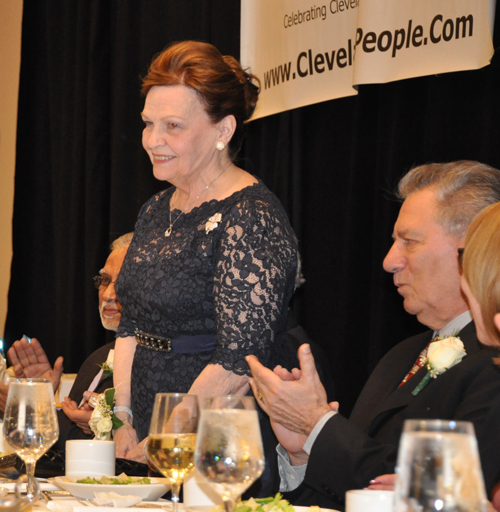 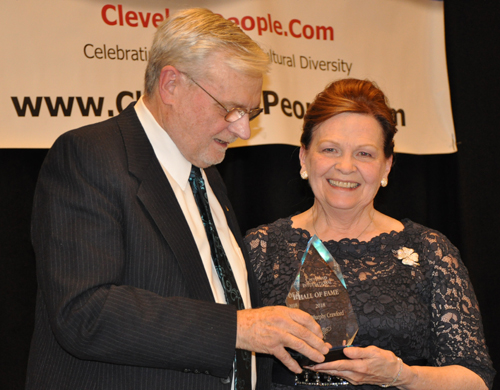 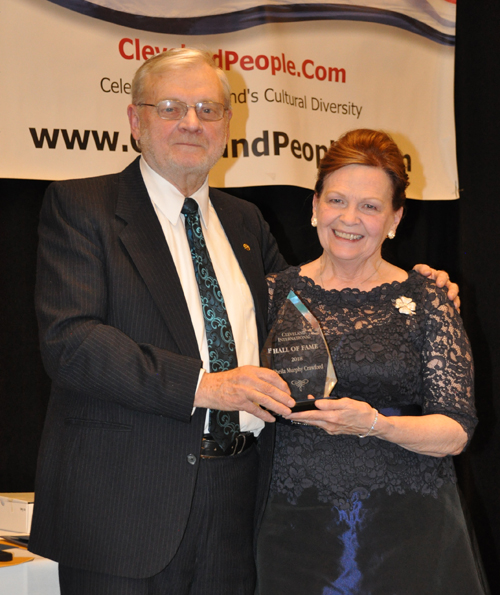 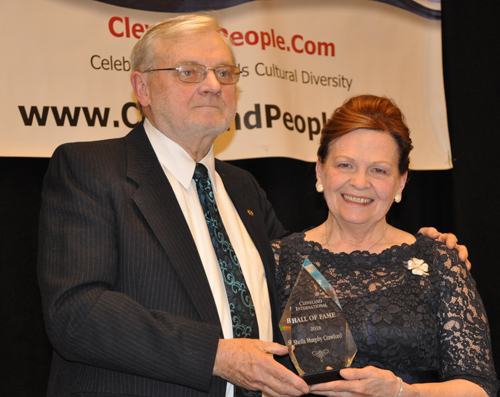 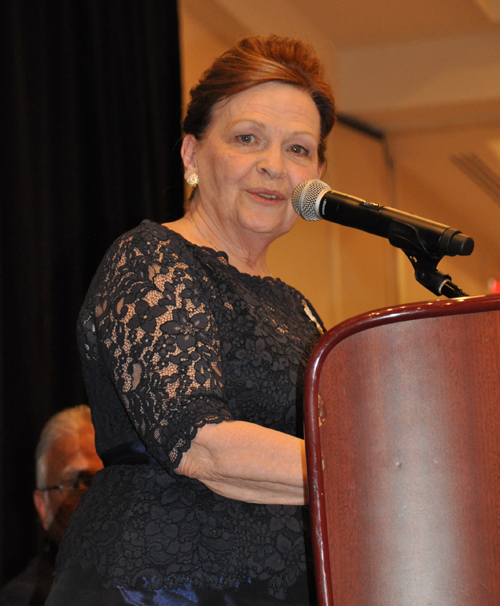 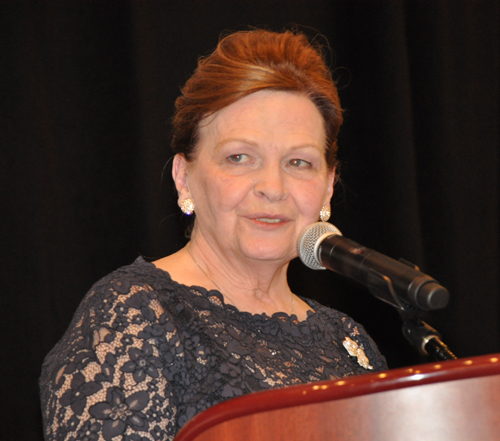 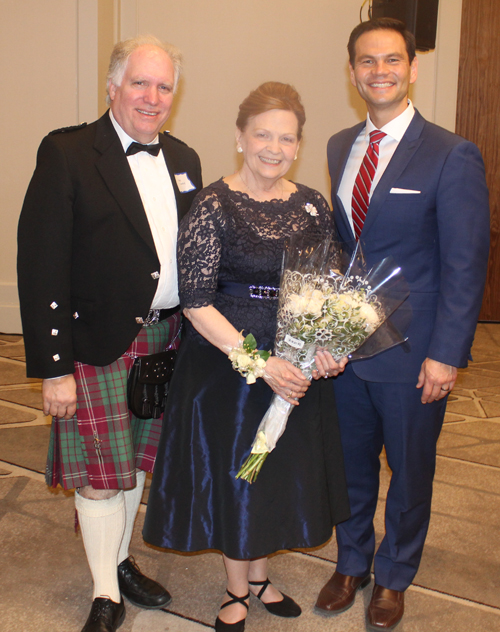 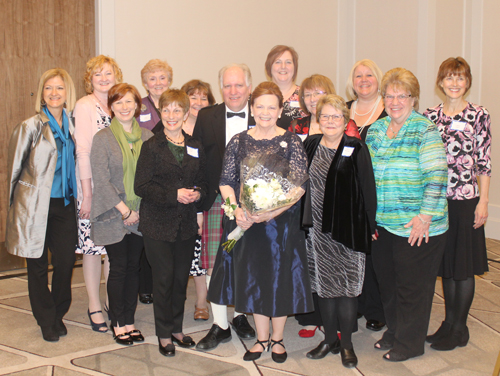 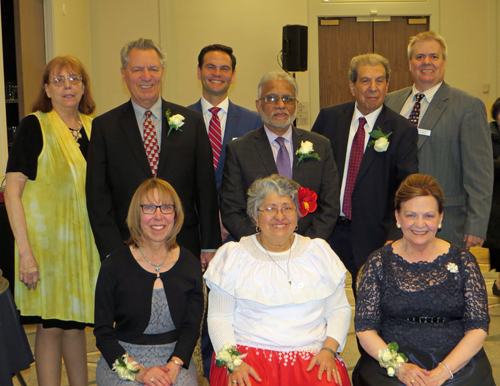 Sheila Murphy was born to Ollie and Betty Murphy in Cleveland, Ohio. She was the
youngest of four children including her brother, Ollie, and her two sisters, Joan and Maureen. With grandparents from County Cork and West Meath, she grew up in a loving Irish-American family where the importance of service to others was stressed.

Christ the King was the family parish and grade school on the east side, then she attended Regina High School, the University of Dayton (B.S. degree in Education) and Cleveland State University for a Master’s degree in English. She married her best friend, Bob Crawford in 1981; after 36 years of marriage, they are still best friends.

Sheila taught English at Brush High School for 32 years and coached the majorette corps for 20 years. She coached several sports teams and choreographed numerous musicals for the high school Music Department and community theater groups. Sheila was honored as Teacher of the Year in 1973.

The Murphy Irish Dancers are known for bringing Irish culture to the community through their highly skilled dancers and exciting unique choreography and costuming. In 2015, the Senior Dance Drama Team won the 1st place World Championship title in Montreal. She has proudly led the Murphy Irish Dancers in thirty-nine consecutive St. Patrick’s Day Parades in Cleveland; and this year she was elected to be the Grand Marshal of the Irish parade, an honor voted on by all twenty-eight Irish organizations in Cleveland.

Following in her mother’s footsteps, Sheila served five terms as President of the Ladies Ancient Order of Hibernians, an Irish charitable organization; and with her sister Joan was Co-Director of the Ohio Degree Team, a ceremonial unit, for ten years. In 1993 she was honored as Hibernian of the Year.

She chaired the One World Day celebration the past two years which brought twenty thousand visitors to the gardens and the 100th Anniversary celebrations of the Cultural Gardens in 2016.

Sheila has attended every Cleveland Feis since the beginning in 1957; first as a competitor and then as a teacher and adjudicator. In 2015 she was inducted into the North American Feis Commission’s Hall of Fame for her life long dedication and service to the Irish community and the world of Irish Dance. The Greater Cleveland Feis Society nominated her. Serving as secretary for the United Irish Societies in the 70’s, she currently represents the Murphy Irish Arts Association as a delegate.

In recognition of her service, Sheila has received many honors: She was elected Queen Deirdre in 1969 by the Irish American clubs, St. John Vianney Church honored her for her cultural contributions to the Irish Community of Cleveland in 2005; she received the Irish American Archives Society “Walks of Life” award in 2008; she was elected “Honorary Co-Chair” of the St. Patrick’s Day Parade in 2011; the Irish Echo Newspaper selected her for their Irish Woman of Influence Award in New York in 2015, and in 2018, Grand Marshal of the St. Patrick’s Day Parade . She is the 3rd woman in the 176 year history of the parade to receive this honor.

Service, especially in the Irish Community, was part of the family tradition. Sheila has taught and inspired thousands of students over the years to embrace and cherish their heritage, to work hard to be the best they can be, to learn from defeat, and to never ask someone else to do something you would not do yourself. Through dedication, hard work, and service, she has modeled her ideals and the joy in life through good works. 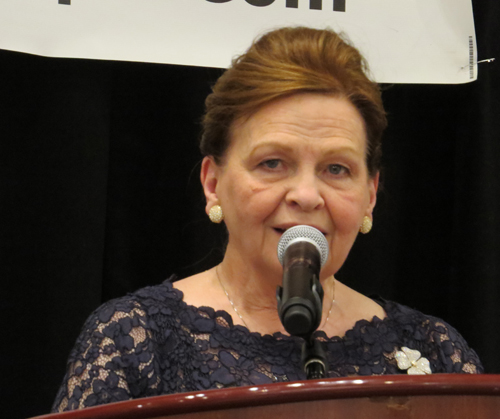