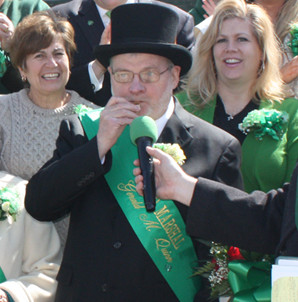 Gerald M. Quinn, an award winning broadcaster and community leader born in Garracloon, County Mayo (pop. 44) and now living in Euclid, has played a decisive part in keeping Cleveland area Irish in touch with their heritage. He conceived and chaired the efforts that led to the founding of Cleveland’s Irish American Club – East Side in 1978 and the Mayo Society in 2004.

His weekly show, Gerry Quinn Irish Radio (WHK 1420), 31 years on the air, has received the Achievement in Radio Award (A.I.R) and was named Best Ethnic Program in Northeast Ohio.

Gerald Michael Quinn was introduced to the achievements of civilization at the local National School a few miles from Ballina, a school which has been educating Irish youth since 1855. He attended under the watchful eye of his own father, Liam Quinn, its schoolmaster.

It was in Cleveland, Ohio that he would meet his bride, Nellie Stack, the daughter of a Kerry man and a colleen from Wexford. Gerry and Nellie reared a daughter, Mary Ellen, and five sons, Patrick, Sean, Kevin, Gerald and Michael.

It was as a project manager for a Philadelphia construction and engineering company that Gerry traveled to Dublin in 1979 to manage construction of a pharmaceutical plant. This subsequently led to a long phone conversation about Ireland with his friend Leo D’Arcy, that was taped for a radio station D’Arcy managed in Willoughby. He signed Gerry on the spot, launching the lad from Garracloon on his own 3 decades long career as a broadcaster. Gerry was honored as Grand Marshall of the 2011 Cleveland St. Patrick’s Day Parade.