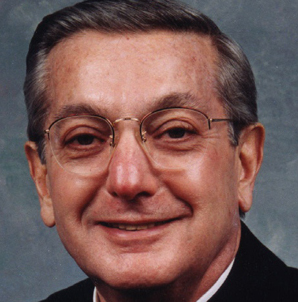 Anthony Michael Pilla, the son of Italian immigrants, was born in Cleveland and was educated in public schools until high school that he began at Cathedral Latin and completed at St. Gregory Seminary in Cincinnati, Ohio. He continued in college until Borromeo College Seminary opened in Wickliffe, Ohio.

His preparation was completed at Saint Mary Seminary, Cleveland, and he was ordained to the priesthood on May 23, 1959. His training also includes a Bachelor of Arts in Philosophy and a Master of Arts in History from John Carroll University, Cleveland.

Bishop Pilla was Associate Pastor of St. Bartholomew Parish, Middleburg Heights, Ohio from 1959 to 1960 and then was assigned to the faculty of Borromeo Seminary High School. In 1972 he was appointed President-Rector of Borromeo College Seminary and in 1975 became the Bishop’s Secretary for Services to Clergy and Religious.

For three years Bishop Pilla served as Vice President of the National Conference of Catholic Bishops (NCCB) and was elected President (of the NCCB) in November 1995, completing his term in November 1998.

Bishop Pilla took seriously the challenge to be a messenger of God to our world, in our time. In collaboration with parishes, priests, pastoral staffs, diocesan, civic and community organizations, he led and educated, called for faith and action on the vast social, political, economic, national and international issues we face every day.

Bishop Pilla’s leadership resulted in the Church in the City initiative, a powerful reminder of Catholic social teaching in action.

He was, and still is, a living model of a Servant Leader – one who demonstrates the values, knowledge, skills and actions that invite others to greater holiness. We are truly blessed that even though retired, he continues to minister to and among us.