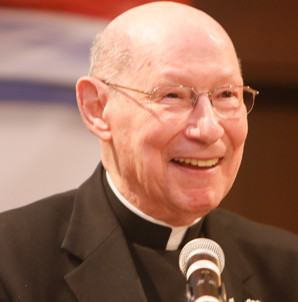 He attended St. Vitus Elementary School and then Cathedral Latin High School. He went on to Sacred Heart Seminary, Detroit, MI and then St. Mary Seminary for his Cleveland Ordination. He received a Master of Arts degree from John Carroll University and a Ph.D. in 1964 from Western Reserve University.

Among his many well-deserved honors are: